Battery grips are a popular camera accessory, and that’s not entirely without reason. In this article, we’ll attempt to answer the question; does a battery grip increase fps? We shall also explore their advantages and shortcomings in detail. Finally, you’ll find useful tips on how to get the most out of your camera grip and what you should know before you get one.

There is nothing more frustrating than seeing a blinking battery symbol in the middle of a shoot. Nevertheless, battery grips, also known as vertical grips, unlock several benefits, aside from extended battery life.

Contents show
Does a Battery Grip Increase FPS?
What are battery grips, and how are they useful?
9 REASONS TO BE USING A BATTERY GRIP
1. Ergonomics
2. Extended Battery Life
3. Added Functionality
4. Higher Frame Rate
5. More Stable Handheld Footage
6. Vertical Grip for Portraits
7. Strap Mount for Vertical Grip
8. Side Battery Access
9. Alternative Power Source
CAN YOU USE A TRIPOD WITH A BATTERY GRIP?
REASONS NOT TO USE BATTERY GRIP
Extra Cost
Size
Weight
TIPS AND TRICKS
HOW TO GET THE MOST OUT OF YOUR BATTERY GRIP
FINAL THOUGHTS

Does a Battery Grip Increase FPS?

Yes, a battery grip can increase the FPS (frames per second) achieved by a camera because of the increased performance boost received from the additional batteries.

What are battery grips, and how are they useful?

A camera battery grip is a physical accessory that is attached to the camera body. This is a helpful addition, as it provides several ergonomic and, in some cases, functional upgrades for the photographer. For example, it offers extended battery life and a better, more secure grip during shooting. But that’s not all. Although there are pros and cons to using any camera accessory, let’s have a look at some of the most substantial reasons to be using a battery pack.

9 REASONS TO BE USING A BATTERY GRIP

The most immediate and noticeable advantage of a battery pack is that it provides ample, comfortable grip by having a larger surface area. The feel of the camera instantly gets more solid and creates a sense of confidence. While the overall weight increases, it becomes easier to handle the camera in any orientation.

Another immediate benefit of attaching a vertical grip to your mirrorless or DSLR camera is the instant battery boost. As a battery grip contains two batteries, the number of shots per full charge approximately doubles.

If you need to capture longer video or even capture raw video clips, you’ll be pleased to know that it’s possible to get longer recording times with the addition of a battery grip on some cameras. When using an original battery grip like a Canon BG-E20 coupled with Canon LP-E6N batteries, you are sure to get full functionality as intended by the manufacturer.

Some cameras enjoy an extra performance boost with their original grip. Fuji X-H1 doubles its continuous shooting time from 15 to 30 minutes of video. The X-T3, however, not only goes from 20 to 30 minutes. It also doubles the frames per second (fps) from 30p to 60.

It’s not unusual to get a higher frame rate in burst mode, too, once a battery grip is installed. For example, the legendary Nikon D850 goes up to 9 fps from 7 in burst mode. 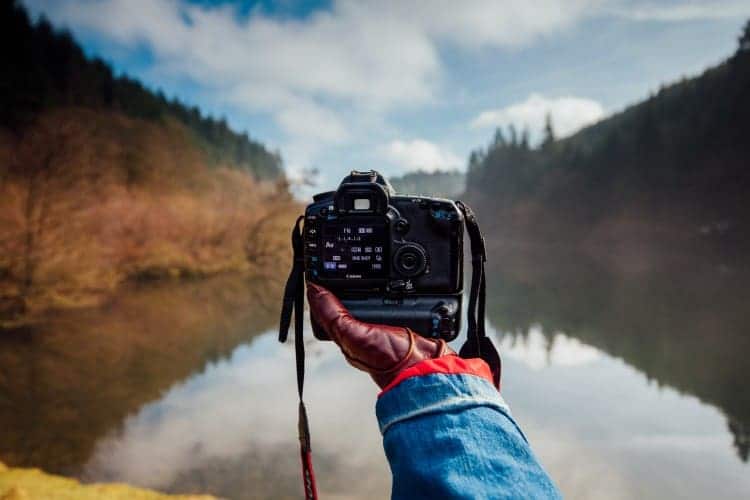 Those who do handheld footage and low light photography will appreciate the added stability when holding the DSLR camera with a battery grip attached to it. The extra bulk creates less jitter and shakiness and helps get a more cinematic-looking movement instead. Coupled with the better frame rate, this is one of the vital battery grip benefits for shooting video and fast-moving subjects.

As portraits are often done in vertical orientation, it can feel tiring and clunky to operate the camera in this position. Vertical grips solve this problem by providing a natural, convenient way to hold the camera in portrait orientation. There is also a shutter button, dial wheel, and even the surrounding buttons such as AF-L. In essence, all the essential controls are doubled and more accessible.

For better safety, while shooting, there are strap mounts specifically designed to attach to battery grips.

The camera feels like it becomes a high-tech extension of the photographer’s hand, feeling less like an external device and more like a glove with a lens. Strap mounts can also help reduce arm, wrist, and shoulder fatigue during longer sessions.

When using a power bank, the battery door is always easily accessible. The same typically goes for connection ports and other critical parts. This means versatility plus easier and faster battery changes during shoots. The dual batteries are placed inside an insert that then goes inside the battery grip itself. With multiple inserts, it’s possible to replace batteries in a couple of seconds, significantly reducing downtime.

Sometimes, even a battery grip doesn’t provide enough juice for the project. For those who need the option to shoot uninterrupted for hours on end, it’s possible to add an external power source such as a power bank or mains power via a Case Relay from Tether Tools. 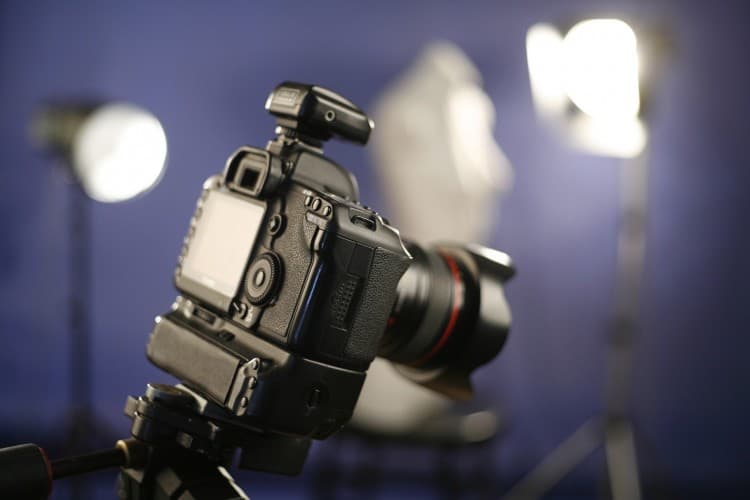 CAN YOU USE A TRIPOD WITH A BATTERY GRIP?

The short answer is yes, you can use a tripod with a battery grip. But whether and how to do it depends on what type of lens you are shooting with.

If your lens has a collar, it’s best to simply use it – and drop the battery grip altogether. But it depends on how you’re operating the camera, too. If you’re pressing the shutter remotely or using the timer function, the camera needs to settle before the next exposure. That’s to avoid blur.

Suppose instead, you’re clicking away without removing your hand from the camera. In that case, you’ll find that the added weight of the battery pack contributes to stabilizing the entire system on the tripod.

In case you need to be shooting in vertical orientation on the tripod, an L-bracket is the way forward. It adds an extra plate to the camera’s side while keeping components like the card door and mic input unobstructed. At least, if you go with an OEM L-bracket from your camera manufacturer. In our experience, inexpensive third-party brackets don’t always align perfectly with the camera layout in terms of blocking.

Lastly, the battery grip tends to introduce downward creep to the camera, mainly when the lens is aiming down on the subject. This is not uncommon in macro and product photography.

REASONS NOT TO USE BATTERY GRIP

Although vertical grips provide many fantastic advantages, there are some downsides, too. Let’s see what those are.

An original battery grip will easily set you back at least a hundred dollars, often more. While there are aftermarket grips available, the OEM ones typically have better build quality, and the texture and finish tend to match the compatible camera body perfectly. This is not always the case with the cheap knockoff versions.

When purchasing a battery grip, you’ll also need at least 2 spare batteries. Preferably, original and both brand new – so that they have the best possible performance and reliability and can be used and recharged in sync. Original batteries like those from Sony or Canon will quickly run you up well past 150 dollars, if not more.

The stability comes at a cost, in the form of added bulk and heft. If you travel light with your camera, a battery grip might not be for you. The added size also makes the camera appear more substantial, professional-looking, and intimidating to some. It gets much harder to do inconspicuous, stealthy work with an added grip, which is why it’s best suited for sports, portrait work, studio sessions, and video capture.

With extra bells and whistles comes excess weight. If you are dragging your camera around the whole day, you might want to reconsider your options. With that out of the way, the higher weight can be advantageous when using big, heavy telephoto lenses and even primes. The added weight can help balance the body and the lens so that the whole unit becomes less front-heavy and more comfortable to hold.

HOW TO GET THE MOST OUT OF YOUR BATTERY GRIP

Consider the use-case. What’s most essential for you in the particular shoot? Is it agility and extended recording times? Will you be stationary or moving around for hours?

Get OEM. Although the same functionality can be had at a fraction of the cost, it’s usually better to invest in original equipment. There is less risk, better resale value, and an overall better experience.

Original batteries, although expensive, will prove their worth in the long term. Ensure that you’re at least using the same brand of batteries purchased at the same time. Using and charging the battery pair in sync, you get the optimum performance for the longest time possible.

Don’t use aa batteries. Most battery grips come with an extra insert that houses standard aa batteries. The advantage is that those are widely available and inexpensive.

In practice, though, the performance does not live up to genuine brand name batteries from Canon, Sony, Fuji, or even budget aftermarket options. Also, there is much more hassle involved in changing a handful of aa batteries than in sliding a dual battery insert into the grip.

Carry four batteries. Because the battery pack contains two batteries at a time, you’ll need two more to swap when the first pair is due for a recharge. Think ahead and make sure you have an extra pair in the bag.

Battery grips can, indeed, increase the frame rate in video footage as well as burst shots. They can be powerful tools in the right hands, but they are not the end-all-be-all. For some use-cases such as portraiture, sports, and filmmaking, vertical grips can prove indispensable. The best performance is attained with OEM products, including the batteries themselves.