Welcome to the new age, an era where user-generated content is on the rise. Ever since this rise in popularity, there has never been a better time to announce the best cheap vlogging camera with a flip screen.

Sony couldn’t have timed the launch of their ZV-1 vlogging camera any better. If the recent lockdown isn’t proof enough that vloggers like The Body Coach are the face of a new generation, then let the statistics speak for themselves. A whopping 80 percent of adults (18-49) watch YouTube – one of the prime vlogging destinations.

It’s no surprise really, that the marketing bods at Sony have seized this opportunity to launch a high-spec, yet reasonably cheap vlogging camera.

All hail then, the Sony ZV-1; aka the latest Sony vlogging camera to hit the market. Already touted as one of the best vlogging cameras under $1,000 available, it’s gaining interest from influencers like iJustine amongst many others.

When was the Sony ZV 1 released?

With the Sony ZV 1 mirrorless camera release date being box fresh (26 May 2020), let’s take a look at this model in more detail.

If you plan on joining the legion of growing vloggers, you’ll need to invest in a robust piece of kit. Due to the nature of vlogging, there’s a couple of core features you’ll need to look out for; a flip screen camera, a high-quality microphone, and a lightweight model that’s easy to transport amongst other features.

Traditionally, Sony has been associated with photography over its video credentials. However, just like their competitor listened with the Canon M50, it feels as if Sony really listened to feedback to make a game-changing low light digital camera with decent video quality.

Let’s get stuck in… 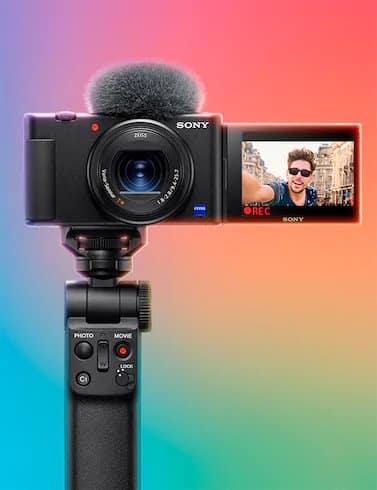 On the technical side, the bright optical zoom 24-70mm f/1.8-2.8 lens with Real-Time tracking and AF system is outstanding. On the practical side, this digital camera is peppered with great features, like its auto turn on and off when you open the screen, a grippy surface, and built-in ND filter, surely making it one of the best vlogging cameras with a flip screen right now.

Allowing you to shoot like a pro, here are some of our favorite features:

Is the Sony ZV-1 a Full-Frame Camera?

No, it’s not a full-frame DSLR camera, but that does not stop us from being impressed with the mighty punch this HD video and 4k video camera packs with its top notch video recording capabilities.

The Sony ZV-1 is clearly designed for content creation, which can be seen in each of its smart features.

First of all, the model toggles easily between a Sony ZV 1 autofocus webcam for home use and a lightweight piece of kit with decent video quality that you can take out and about with you. This includes an awesome ‘product showcase mode’ designed for all those precious unboxing moments. Beauty bloggers will especially love the way it automatically focuses in and out of the product and user with ease.

The forward-facing microphone makes it ideal for all those first-person films, for a sharp sound that is crisp even when you flip the camera the other way. And there’s no need to be shy for all those selfies and close-ups with its flattering skin smoothing feature for a softer look.

Further proof that this has been made with vloggers in mind, the record button is firmly placed in a prime position with a big red circle. And you’ll never need to keep checking if you’re rolling since the red light on the front tells you all you need to know. Neat!

Using the camera out and about 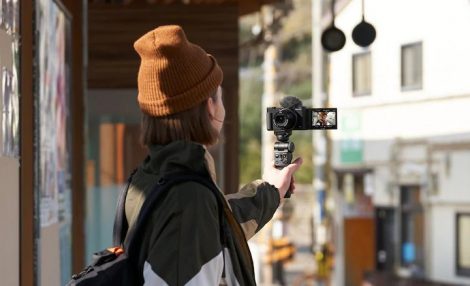 We get it, vloggers are a sociable breed. So you’ll be pleased to know that the model has been optimized for life on-the-go. It’s compact and lightweight enough to fit in your pocket, but not too heavy to weigh it down.

Using a one-inch sensor with decent autofocus allows you to shoot high-quality clips that keep you in focus even in low light. When you’re roving around, ‘Steady Mode’ keeps footage smooth and wobble-free, while ‘Active Steady mode’ is even more focused, especially for all those piece-to-camera moments you’ll want to capture the first time around. Even though this may be Sony’s vlogging camera of the future, there are still a few image stabilization glitches that could be improved further yet. 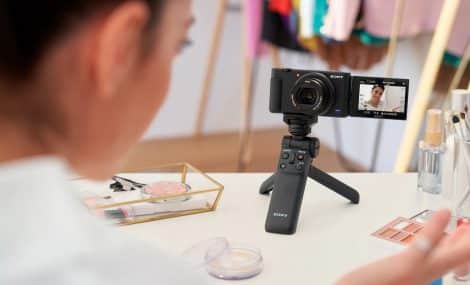 What’s the sound quality like on the Sony ZV 1?

An important question that any professional vlogger needs to ask is what is the sound quality like? It’s decent.

And, can you connect an external microphone to the Sony ZV-1? Yes, you can via the mic input naturally enough! This is one the reasons why we like it as a vlog camera.

Internal microphones are forward-facing as mentioned. But this may not always be enough to create that ‘in the moment’ experience. Useful then, that there are ports for additional microphones. And when the wind levels get too rowdy, don’t worry because it even comes with a buffer to clip on, keeping noise interference low. 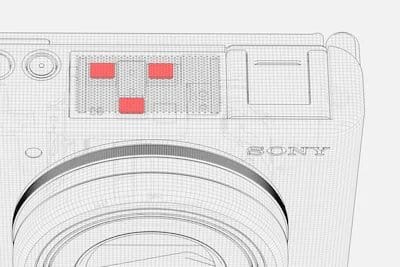 So while you can connect an external microphone, our only complaint is that there’s no headphone jack.

As you’d expect from a compact camera that can shoot 20.1 megapixels and 4k video, the video quality is pretty darn good. That said, there are video recording limitations, such as the ability to film 4k video in short five-minute bursts. 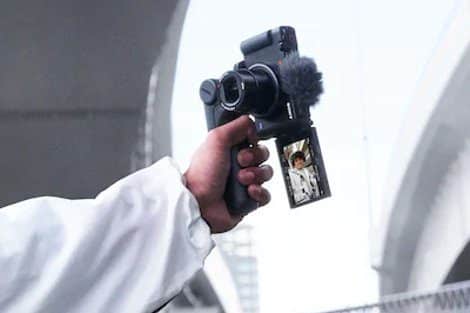 It’s easy to get to grips with and allows you to stay in creative control with the touch screen, with lots of great additions. For instance, the Bokeh switch allows you to pivot from manual to auto-adjusted backgrounds, allowing you to choose where the eye should focus. It’s small touches like this that have users raving about the Sony vlogging camera.

There are different shooting modes too, allowing you to capture slow-mo beautifully, in up to 900 frames a second. And there’s a host of color profiles to play around with too, for different filters and feels. It can also double up as a have decent action camera.

Is the Sony ZV-1 good for photography?

Of course, do keep in mind that you will have less creative control than other Sony cameras since it uses real-time tracking autofocus (even during continuous shooting). But that’s a small trade-off. And here’s another – there’s no flash on the Sony ZV-1.

There’s no question that the Sony ZV-1 is a powerhouse of a video camera. It’s loaded with well-considered features, designed around personal filming. Coupled with Sony’s powerful technology, it’s an all-rounder, giving you everything you could want or need for vlogging.

Its user-friendly features (high quality LCD screen) and optical image stabilization make it equally as desirable for pros as it is as a vlogging camera for beginners.

At launch, the Sony ZV-1 price starts from £699 / $749. So it costs less than the Panasonic Lumix G95. The Sony ZV-1 is well worth the money. Consider it not only a personal investment in your brand, but also in your filming prowess.

Is the Sony ZV-1 the best cheap vlogging camera with a flip screen on the market for vloggers? Yes, we think it probably is.